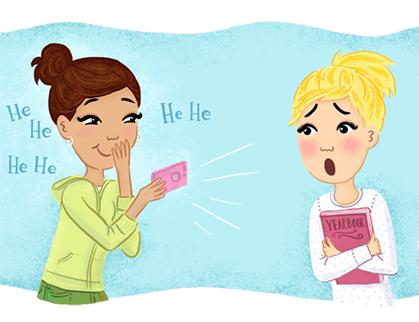 Not Just a Picture

“What are you doing?” My voice was small and quiet, too quiet for Vi to hear above her giggles. I felt so helpless and my eyes widened with panic. I could feel my heart in my throat, and I pushed it down. I hoped I was wrong and Vi hadn’t just taken a video of me.

Who am I kidding. It’s Vi. I know what she did, I thought.

I dove at Vi and grabbed at her phone. Though I managed to surprise her, she still held her phone out of my reach. Her laughter rang in my ears, and I fought the urge to cry.

The last time Vi took an embarrassing video of me, she sent it to her friends on Snapchat. It didn’t take long for them to tease me about it, sending me mocking texts or imitating the scene at school for everyone else to see. The worst part was that I hadn’t even seen Vi take the video. When I confronted her about it later, she just laughed. Vi is really pretty and confident, so she doesn’t have to worry about things like taking a bad picture, or looking dumb in a video. She doesn’t know what it’s like to see the ugliest version of yourself and wish you could put a paper bag over your head. She doesn’t know what it’s like to see something you hate every time you look in the mirror.

It took a while, but eventually everyone forgot about the video. I pretended I did, too. It was easier that way, and I knew Vi wasn’t trying to be mean. She just thought it was funny, and I didn’t. I guess that was my own fault.

I had just started to move past that event when I caught Vi holding up her phone and laughing as I kissed her yearbook. See, I think this boy named Caden is cute. Vi dared me to kiss his picture. I didn’t think about it. I just did it. And to make matters worse, I called him cute and acted all silly before kissing the picture. Vi had a video she could share with almost the whole school! I felt my heartbeat pound in my ears.

Read the rest of the story in your November issue of SHINE brightly!