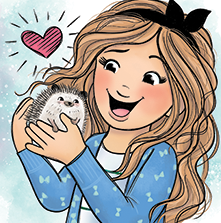 My Name Should Be Prickles

Hi. My name is Pickles, but it should be Prickles. Why? Because I’m a prickly hedgehog, that’s why.

The girl who suggested Pickles, her name is Jasmine, actually said it should be Prickles. Only the teacher, Miss Likely, wasn’t close enough to hear it right. And Jasmine is shy, so when Miss Likely said, “Did you say Pickles?” Jasmine just nodded.

She shouldn’t have nodded. She should have said, “No, I said Prickles,” so I wouldn’t end up with this dumb name. But Jasmine doesn’t like talking in front of people, and I think it probably took her a lot of courage to speak up in the first place. So, I guess I can’t blame Jasmine for having spent all her courage so she didn’t have any left over.

I just wish all the other tiny humans who take care of me hadn’t agreed to Pickles. I don’t even like pickles.

But, I can’t say I’m surprised. I have to deal with these tiny, weird humans every single day. Sometimes the humans will sneeze or cough right into their hands and then try to pick me up. Are you kidding? I want to say. What makes you think that I want to be held in your sneezy hands? Other times, they’ll crowd really close and get all up in my space. This is a major problem because I have claustrophobia, which means I have a fear of small spaces. Sometimes my cage even stresses me out because it feels so small. When I start feeling that way or when the tiny humans are too much for me, I curl up into a prickly ball and shut my eyes real tight. If I can’t see them, they can’t see me.

Lately I’ve been spending a lot of time in a prickly ball. It feels like the tiny humans aren’t being as gentle with me as they used to be. Except for Jasmine. Jasmine has always been careful with me. I like Jasmine. Even if she’s the reason my name is Pickles.

Today Jasmine stays inside for recess. That’s what the tiny humans call the time when they play outside of their cage. It’s usually a nice break for me, because the humans are busy playing instead of bothering me.

But Jasmine is inside this recess, which maybe means she’s in trouble. Only, Jasmine isn’t the kind of human to get in trouble. She’s nice and kind to everyone, including me. I can’t imagine she did something wrong.

Find out what happens in your April issue of SHINE brightly!

GEMS On The GO is a new initiative by GEMS for girls.Find Out More! or Dismiss