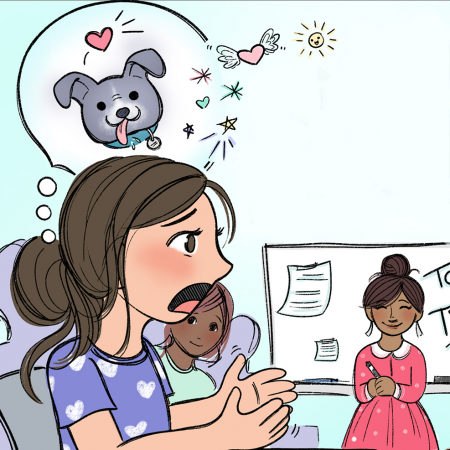 Half the class cheered. The other half groaned.

Every week, Ms. Turkhill read a news story and asked the class: “What do you think?”

And every week, hands shot up around the room. Everyone wanted to share their thoughts on how to stop war or feed hungry people or clean up parks. Sometimes they agreed. Sometimes they disagreed.

Rita never raised her hand. She could not believe how brave her classmates were. Rita hated to talk in class.

Once, after school, Ms. Turkhill said, “Rita, you have great ideas. Why won’t you share them with the class?”

Rita would just shrug. But she knew why: What if she were wrong? What if other people laughed? No one needed to hear what she had to say anyway.

Ms. Turkhill said it was her “mission” to get Rita to raise her hand. But Rita never did. Each week during Big Topic Time, Rita looked down at her desk and just listened. In her mind, she agreed or disagreed.

Ms. Turkhill sat on her stool and shook a paper in front of her.

“Today’s Big Topic is Pit Bulls: Should Grovetown ban them?”

Ms. Turkhill began to read. One woman was upset about all the families who were adopting pit bulls from the local shelter.

“They’re dangerous animals!” The woman said. “We need to get rid of them.”

As Ms. Turkhill read, Rita’s face grew red. She burned with anger. How could this woman be so cruel?

Then Ms. Turkhill turned to the class. “So, what do you all think?”

Rita looked around at the hands that flew into the air. Ms. Turkhill began calling on kids. Some kids agreed with the woman. Others said she sounded crabby. And then, Simon spoke.

“Pit bulls are mean,” he said. “That’s why criminals get them. No nice person would ever get a pit bull.”

Rita’s leg shook under her desk. Her pencil tapped on her desk. Her eyes locked on to the back of Simon’s head. Rita might not like to talk in class, but she had no choice.

Benny, her sweet, blue-nosed pit bull, needed someone to speak up for him.

Read the rest of the story in  your September/October issue of Sparkle!