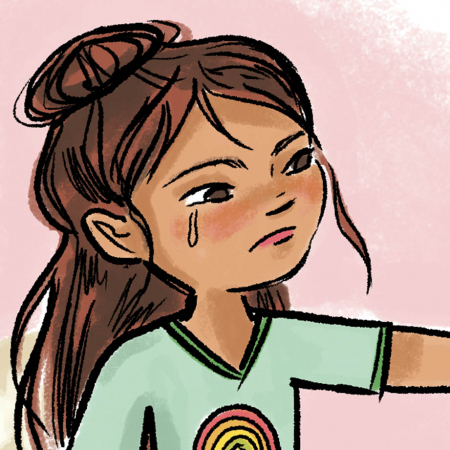 “Hey everyone! So, I HAVE to tell you this hilarious story about Kennedy and the DIY project she was trying to do yesterday…it was
so funny I was like, dying laughing…”

I angrily tap the screen until the video pauses, a tear dropping onto my tablet. I can’t believe this, I think, throwing the tablet to the other side of my bed. I can’t believe she would embarrass me in front of all her dumb viewers just to get a laugh.

I stomp to my closet, tearing down the DIY paper lights I’d worked so hard on yesterday. I’m not very good at crafts, but I figured the lights would be easy enough. The tutorial was so simple. If a random fourth grader on YouTube could do it, then surely I could, too.

I was so wrong.

It took me three hours to make one tiny string of lights, and most of the paper flowers around them were crooked or full of hot glue strings. But I’d worked so hard on those dumb lights, and I couldn’t throw them out. Besides, I had to have something I could show my viewers. Not that there were very many of them in the first place.

But still, I’d tried my best, right? I’d expected to at least get a decent video out of all that work. And yet, what did I get instead? A video of my sister mocking me and sharing my failure with the whole world! I’m so embarrassed, I can’t even imagine having to go to school tomorrow. I’m never going to make it through sixth grade.

“Kenny, did you see it?” I hear Jayden cackle outside my door, and I have to fight the urge to scream. Instead, I get off my bed and fling open the door.

“First of all, DON’T call me Kenny. Second of all, HOW COULD YOU?!” I yell instead, trying not to cry in front of Jayden. I’m supposed to be the more mature one because I’m older. But right now, I want to throw a temper tantrum.

“What? Kenny—sorry, Kennedy, I don’t get it. My video was hilarious! Didn’t you like the shout-out? This video could go viral, you know. You could be Internet famous!”

I shake my head and stomp back to my bed.

“You don’t get it, do you Jay? You EMBARRASSED me. You told everyone that I’m bad at DIY projects, and you made fun of me! What do you think that’s going to do for me and my channel, and my viewers? Huh? You never think of anyone but yourself!”

Read what happens next in your Summer issue of SHINE brightly!